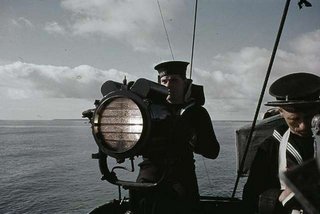 A 32-year-old Whitechapel woman revealed last night that she caught her husband having a saucy exchange with a woman living across the road using coded messages on an Aldis Lamp, a signalling device used by ships to transmit messages to one another while at sea.

Tracy Dell, from Berner Street, told BBC London News: “I first suspected he was up to something when he came home with an Aldis Lamp and told me that he was going to use it if we were flooded out and needed to signal to a life raft while we were on the roof.

‘Initially, I believed him but then he began sneaking up into the loft late at night and I could hear him operating the shutter.

‘I went into the street and could see that he was exchanging signals with the house opposite.

‘I spent the next weeks learning naval signalling codes and then concealed myself in the hedge outside our house and waited.

‘At around midnight, they were at it, and, due to my newly-acquired skills, I was able to decipher every dot and dash.

‘He was describing what he wanted to do to her and she was responding in kind.

‘I eventually ran indoors and broke down when she started signalling that she wanted to nosh him off in our bedroom while I slept’.

‘I confronted him and he eventually came clean, telling me that he was sorry and that it would never happen again.

‘I decided to give him another chance but then filed for divorce when, just a week later, I found semaphore flags hidden at the back of the wardrobe’

Mrs Dell’s revelations come just two weeks after a 40-year-old man left his wife of twenty years after finding her sending lewd messages to one of the builders working on their extension using morse code.