Marine engineers struggling to free the stricken cargo vessel, The Ever Given from it’s wedged position across the Suez Canal, breathed a huge sigh of relief last night as British pop icon, Olly Murs, pledged to free the ocean-going leviathan, which weighs in excess of 200,000 tonnes, using his gigantic face.

Murs flew to Egypt last night from where he told newsmen: “I intend to use my massive dial to displace water in the canal by dipping it into the stretch of water just behind the ship, causing the level to rise extremely quickly. It’s the Archimedes principle but with my face in the canal instead of his arse in the tub.

“I’m convinced that the huge displacement caused by my enormous face will cause the Ever Given to rise upwards, forcing the stern and the bow free which will give the tugs and the heavy equipment on the bank the opportunity to haul her around until she’s facing the right direction.”

The Egyptian president, Abdel Fattah el-Sisi, was full of praise for the Dance With Me star last night,

“My country has been losing over twenty million pounds a day in lost revenue, so Olly’s intervention has been a massive boost and a real Godsend.

“The sooner he gets his enormous, moon face into that water the better as far as I’m concerned”

If successful, this will be the biggest marine rescue operation since pop entrepreneur, Simon Cowell, used his gigantic, high-waisted trousers to haul a stricken, Russian nuclear submarine from the bottom of The Bering Strait in 1997.

Up to thirty women were killed yesterday afternoon during a frenzied stampede to see the actor, Tom Hardy, opening a local specialist cake shop wearing a tight-fitting pair of briefs.

Earlier, a crowd of over a thousand women from across East London had gathered to watch the hunky star open the shop in Whitechapel Road in his pants.

However, tragedy struck when the crowd surged forward as the scantily clad actor emerged from a limousine outside the shop in a pair of black Calvin Klein briefs.

One woman who witnessed the carnage, Tracy Dell, 54 from Thrawl Street told us: “It was absolutely horrendous, to be honest.

“As soon as Tom got out of the car there was a huge surge forward and I saw many women crushed underfoot in the melee.

“I myself trampled on at least five bitches who were standing in front of me, blocking my view of Tom’s lunchbox” 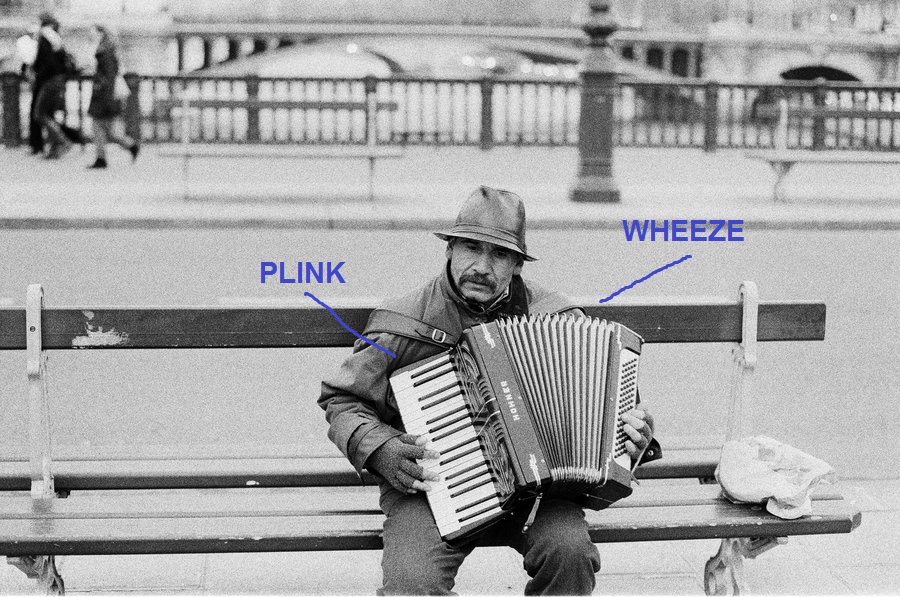 Local man convinced that the Number 24 bus is ever-present among us, like God

A 52-year-old Whitechapel man has told a Whelk reporter that he believes that the number 24 bus is an omnipresent entity that pervades the lives of all humanity and will continue to do so until the very end of time.

Toby Dell, a forklift truck driver from Commercial Street, told us: “Everywhere I go in town I see a number 24 bus.

“It doesn’t matter if I’m in East London, West London, or even south of the river, the 24 is always there.

“I believe it’s been sent to watch over us and to keep us from harm.

“Unless, of course, you’re like my neighbour who stepped off the kerb in Victoria Street in front of one and was killed instantly.

“For is it not written; The Number 24 bus is a vengeful bus and all who stray from its path shall be cast down into the pit.”

A spokesman for Transport For London last night denied Mr Dell’s assertions: “The number 24 is not a terrible, ubiquitous deity that is all-pervasive and omnipresent.

“However, we do concede that it goes from Pimlico to Hampstead Heath, seven days a week and that there are quite a lot of them.  Especially in Tottenham Court Road during the rush hour”

No red-blooded Englishman worth his salt has ever shown a modicum of interest in tennis, claims survey

A recent study conducted over two years by Cambridge university has revealed that not one staunch and manly Englishman has ever liked the game of tennis, with a whopping ninety-nine per cent of those questioned revealing indifference, bordering on hostility, towards the sport.

A spokesman for the university told newsmen last night: “This study shows that barely a single red-blooded male in England likes tennis, largely due to its lack of physical contact and its perceived links to high-born privilege and the upper echelons of society.

“The study also found that the one per cent of males who did actually express a liking for the sport were of a weedy aspect physically with poorly developed biceps and a fondness for flower-arranging, Kylie Minogue, and interior design”

We spoke to a number of men in and around Whitechapel yesterday all of whom seemed to bear out the study’s findings.

“One of those questioned was Toby Dell, a meat porter from Thrawl Street, who was forthright in his condemnation of the sport: “It’s a game for women and poofs” he explained.

“That’s why England have only ever produced a few useless twats that let the country down every time they step out onto the court.

“Just look at Tim Henman and that Andrew Castle, What a couple of mincing ponces they are. Personally, I would have them thrown in jail for crimes against manly humanity”

However, England did produce one player of note in the 1930s.

Fred Perry, won the Wimbledon lawn tennis championship in 1936 but spoiled it when he was caught embroidering lace hankies during a break for rain at the French Championships the following year.

A 54-year-old Whitechapel man has told The Whelk that a Facebook friends request from a man he used to associate with in his late teens and early twenties but who he always considered to be an utter twat has left him feeling cornered and conflicted.

Toby Dell, a meat porter from Berner Street, told us: “I got this friends request from the bloke last week and my heart sank, to be honest.

“The man was a real chump back then and I only knocked about with him because he had a few quid to buy drinks and I was banging his sister.

“I’m now living in fear that he’ll be coming on my statuses and showing me up like shit in front of my mates and family members.

“He’s already added my missus, but she’s told me to accept his request and then tweak my account so that he can’t see any of my posts.

“That sounds a bit too complicated so I’m going to send him a quick message on WhatsApp, telling him that I’m close to death and don’t want him to be upset when he learns on FB that I’ve fallen off the perch in a week or two”

Mr Dell’s story comes just two weeks after a man from neighbouring Poplar sent an irritating would-be Facebook friend a photoshopped image of himself hanging from a noose attached to a light fitting, accompanied by a message from his wife, informing the man that her husband had taken his own life due to being wanted by the police on several murder charges.

If you’ve been affected by any of the issues raised in this piece try telling the person concerned that you’re a massive Donald Trump fan. That usually gets rid of most people although not the complete, mentally sub-normal arseoles – Ed

Speaking to the BBC’s Gary Linekar, Southgate said: “If one or two of the lads are looking a bit tight and are not playing with their usual freedom due to the importance of the occasion, I’ll be taking them into one of the changing room traps to give them a hand shandy.

“Hopefully, after blowing their cocoa, they will be able to perform with more freedom during the second half.

“It’s an old trick I learned from my former England boss, Bobby Robson, who would often take a few of the newer lads into the stalls at half-time where he would give them a vigorous pedal and crank to relieve the tension and get them playing without fear in the second half.

“He even gave me one off the wrist in the centre circle before the dramatic penalty shoot-out against the Germans in Euro ’96 because I was looking a bit nervy.

“He was a very canny operator and had the foresight to have a copy of Playboy in his kit bag which he made me look at while he gave me a rattling good Jodrell.

“He held his big coat with the fur collar in front of me so that nobody in the crowd could see and to ensure that I didn’t splash any of the other lads with spadge. It still didn’t stop me from blazing my kick over the bar mind”

A spokesman for the English Football Association said last night: “I’ve heard of managers pulling players off when they’ve not been performing on the pitch, but this is a new one on me” 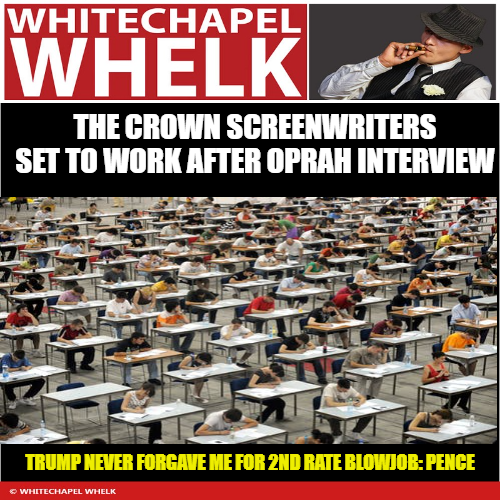 FREE INSIDE: Our handy guide to castigating Meghan Markle in front of friends without revealing you’re a stone-cold white supremacist.

Buckingham Palace last night announced that The Duke of Edinburgh, who has just undergone a heart op at St Bartholemew’s Hospital in London, has been transferred to struggling soccer team, Arsenal, for an undisclosed fee.

The 99-year-old Duke is being drafted in to shore up a Gunners defence that has been leaking goals this season as the club has struggled to remain in mid-table under the stewardship of boss, Mikel Arteta, and who are currently languishing in a lowly 10th place in the Premier League.

Arteta told a press conference yesterday afternoon: “We are hoping that signing Prince Philip will help to turn our season around.

“He’s a much-needed old head with years of experience on the polo field, and also, in that sport where you sit in a cart with a rug over your knees while a horse pulls you along.

“We see him as a Tony Adams-type figure who will steady the ship at a critical time for us as we look to cement a place in the top nine.

“Although, we obviously hope that he won’t be getting as pissed as a parrot on lager and Jägerbombs every night like Tony used to in the 80s”

If the Duke does provide a much-needed boost to the struggling Gunners, he will mirror the feat of his mother, Princess Alice of Battenburg, whose injury-time diving header for East London giants, West Ham United, secured a famous win for The Hammers in the 1980 FA Cup Final at Wembley.