A 23-year-old Whitechapel woman who explosively broke wind while having sex with a man she saw as male perfection has thus far failed to understand that the incident will haunt her on and off for the rest of her life and could even be instrumental in severely damaging her mental health and future relationships with the opposite sex.

Tracy Dell, a shop worker from Leman Street, was enjoying a vigorous romp with the man when she inadvertently broke wind, initially emitting a short series of minor ‘squeakers’ before letting fly with an earsplitting ‘crowd pleaser’ that actually resulted in the man fleeing the bedroom in a mixture of revulsion and terror.

An eminent sexual behaviourist told The Whelk: ‘I’m afraid this incident will come back to haunt this woman for the remainder of her life.

‘Her future relationships with men will be badly affected, to the extent that she may never feel able to enjoy intercourse ever again, much less reach a noisy, uninhibited climax.

‘The fear of another flatulent outburst will blight her entire life and may even be the last thing she recalls on her death bed, that’s if she doesn’t kill herself at some point as the dreadful memory of this inopportune, bottom-based outrage gnaws at her sanity and drains her will to live’

Last year, scientists estimated that, in an average week, over thirty million women worldwide will break wind during intercourse.

That’s enough gas to inflate the Donald Trump blimp that was flown over London in 2019 at least thirty times.

A 35-year-old man from Whitechapel last night claimed to have experienced a brief moment of vague interest during a heart to heart talk with his girlfriend, who wished to discuss where their relationship was going.

“It was last Saturday night and I was looking forward to Match Of The Day when my girlfriend, suddenly and without warning, began to discuss our relationship and her hopes and fears for our future together.

“Naturally, I zoned out immediately and started wondering about the number of cans of beer I had left in the fridge. I even got up and checked at one point to set my mind at rest.

“However, as soon as I sat back down she began talking about how our relationship had developed over the last year and how she hoped we could move up to a new level if we really committed to each other and learned to concentrate on the important things.

“It was when she began to reminisce about how we’d first met that I suddenly felt a fleeting moment of interest.

“I began to vaguely recall how I’d dumped my previous girlfriend to take up with her, and started to wonder if I still had those pics of my ex in her underwear on my phone.

“I had a quick check to make sure and fortunately, they were still there. I sighed with relief and began to mentally go over the day’s football results as my girlfriend moved on to how she sometimes felt taken for granted and unimportant.

“Luckily, she had just started to talk about her best friend’s wonderful relationship, and how she and her fiance were planning a June wedding, when the match started and I was able to send her out to get me another beer while I put the headphones on to listen to the commentary in peace”

This latest revelation comes just two weeks after a man from Sheffield claimed to have expressed a half-hearted opinion on interior decor when his girlfriend told him she was thinking of painting the downstairs toilet.

Local man converts bath to shower with wife still in it 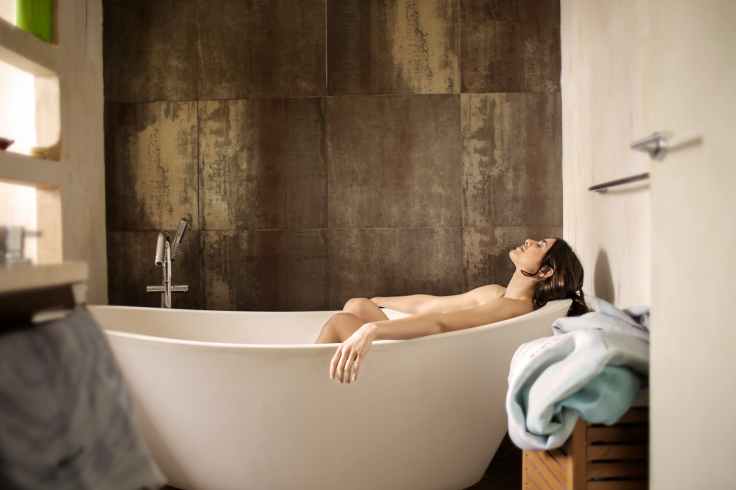 A local DIY enthusiast has told The Whelk that he converted the bath in his upstairs bathroom into a spacious, walk-in shower while his wife remained in the tub.

Toby Dell, a forklift truck engineer from Dock Street, told us: “The conversion job was something I’d been intending to do for ages so I thought I’d have a crack at it during this lockdown period.

“I got all the materials upstairs along with my tools and went in to make a start.

“Unfortunately, the missus was having a soak at the time which made things a bit tricky.

“I began by ripping up the floorboards to connect up the waste and to join some flexi-pipe to the rising main with push-fit unions.

“I then dragged the bath with the wife in it to one side while I built an insulated stud wall on one side and installed the toughened glass doors.

“I then chased out the wall with an air chisel for the electrics and fed the wiring up through the floor direct from the fuse box.

“The missus started moaning at this point because the flakes of plaster and concrete dust had settled on her water, forming a crust.

“I told her that I’d soon be finished and started cutting the sides off the tub with an angle grinder ready to take down the dump.

“She had to get out and start drying off at this point because all the water came pissing out over the plastic sheeting I’d put down to prevent water damage to the ceiling joists.

“A couple of hours later I was done and called the old woman in to have a look at the result.

“To my disappointment, she didn’t like it and told me to go down to B&Q get a new bath because the shower would put her scented candles out”

It is estimated, that during a calendar year, the average woman sits in over 2 tonnes of her own grime in the tub while listening to smooth Soul music tracks and thinking about Jason Mamoa or Tom Hardy with no shirt on.

A bride-to-be failed to show up at her own wedding last week, choosing instead to blow up her future mother-in-law using high explosives.

Tracy Dell, 22, from Whitechapel in East London told The Whelk that she’d reached the end of her tether due to the woman’s constant interference with the wedding arrangements.

“She was on my case, morning, noon and night,” she told us.

“If it wasn’t the guest list, the bridesmaid’s dresses, or the seating arrangements, she was banging on about my choice of food for the buffet.

“The last straw came when she told me to switch from being a Roman Catholic to a Jew so that she could make matzo balls and chicken soup for the reception.

“I looked up the ingredients and the method for bomb-making online, and on the morning of the wedding, left the device in her kitchen after calling in on the pretext of discussing the honeymoon arrangements.

This latest incident comes just 2 weeks after a 23-year-old man from neighbouring Shoreditch bundled his 67-year-old future mother-in-law into the lion enclosure at London Zoo after the woman had criticised his choice of top hat for the big day.

Rees-Mogg, 49, allegedly lay in wait for the youngster outside The Marriot Hotel in Westminster where she was staying during a family holiday with her parents, Mama June and Sugar Bear.

According to an eye-witness, the Tory MP for North-East Somerset, launched a frenzied attack on Boo Boo as she made her way to a waiting Uber taxi, bludgeoning her to the ground before making off towards Vauxhall Bridge.

A close friend of the Tory toff told us last night: “I’m not surprised that Jacob has battered Honey Boo Boo.

“He’s never liked her and used to slag her off in Latin whenever her show was on.

In 2014, Rees-Mogg was fined £150 and bound over to keep the peace after punching, American singing star, Little Jimmy Osmond, in the stomach in a restaurant in Knightsbridge.

It was revealed yesterday, that all the staff and pupils at a secondary school in East London have at one time seen each other’s genitalia on various social media platforms such as Snapchat and WhatsApp.

The school newspaper, The Whitechapel Academy Bugle, made the findings after an intensive survey carried out over 12 weeks.

The paper’s editor-in-chief, Toby Dell, 16, revealed: ‘It’s absolutely normal for kids to post pics of their cocks and growlers online these days and for them to be passed around the school, but we were a bit surprised to find the staff were at it too.

“In fact, some of the younger staff members were in pretty decent nick it has to be said.

“Miss Wickstead, the PE mistress had a cracking set of bangers on her, as did, Mrs Parkes, the art teacher, although, to be honest, she could do with trimming that quim a tad.”

The Headteacher, Terence Carter, 63, has now resigned his post after being subjected to online bullying from a number of parents who were less than impressed by the size of his cock.

Toby Dell from Commercial Street, told us last night: “This woman entered the store at the same time as me and I realised at once she was going to be a real problem.

“She began walking slowly in front of me with her trolley angled so that I couldn’t get past.

“When she finally stopped to choose some loose bananas, I managed to squeeze past, only to find this bitch had once again overtaken me while I was putting some Greek yoghurt and cottage cheese in my trolley at the cold section

The piece of human garbage then started crawling along at a snail’s pace in front of me once again, occasionally stopping to faff about endlessly while choosing an item from the shelves.

Mr Dell’s assessment comes just two weeks after a 50-year-old woman from Shadwell told us, that, in her view, a man who held her up in the newsagent by counting out his small change on the counter was “a fucking arseole that should have been drowned in a bucket at birth”

A 22-year-old Whitechapel man was last night eagerly awaiting the long hard chat that his girlfriend of two years had insisted they have earlier today.

Toby Dell, a market trader from Vallance Road, told us: “I can’t wait to find out what it is she wants to chat about.

“To be honest, we’ve not really been communicating like we used to ever since she found out I’d slept with her mum and younger sister.

“And then there were the sex line calls that I used her card to pay for, and the sexually transmitted disease misunderstanding.

In other related news, a 20-year-old man who was caught wearing his girlfriend’s bra and knickers was found hanged at his home after she told him she wanted, ‘a serious discussion about where their relationship was going’

A Whitechapel woman murdered her boyfriend in cold blood after he switched off the radio at their home before the end of Mr Blue Sky by ELO, a court heard yesterday.

Tracy Dell, 42, attacked her live-in lover, Steven Carter, 47, with a pickaxe handle at their home in Vallance Road on December 23 last year.

“Dell’s barrister, Michael Higgins QC, told the court that Ms Dell lost control after Carter turned off the radio just before the soaring violin crescendo at the end and the subsequent vibrato vocal in which vocalist, Jeff Lynn, sings, ‘Mister Blue Sky’ in a tremulous voice.

“It’s her favourite bit” he explained to the jury. “Is it any wonder that she was filled with murderous rage? ”

Sentencing Dell to life with a 25-year recommendation, Judge William Shay QC, told her: “You are clearly a ruthless and dangerous woman who will resort to any lengths to listen to your favourite bits at the end of records, including cold-blooded murder”

Dell’s crime mirrors that of a 32-year-old woman from neighbouring Cripplegate, who murdered her husband with a hatchet last year after he began talking during the introduction to Wilson Picket’s classic, In The Midnight Hour.