THIS WEEK: The Last Subpoena by Leonardo Da Vinci

During an exclusive Whelk interview, Murs, 85, told us: “I’ve allowed my big face to be used for a number of projects down the years, from a film set for a movie about the moon landings to a refugee camp for thirty thousand fleeing victims of the war in Syria. However, I draw the line at allowing Trump to build a golf course on my massive dial for him and his odious Republican cronies.

“Can you imagine the horror of having Rudy Giuliani teeing off close to one of my eyes and catching a glimpse of his cock and balls up his trouser leg?

“Even if I did allow the project to go ahead, what are the chances of getting paid?

“The guy’s a notorious crook with a long history of reneging on his debts, and in any case, he’ll be in jail before the end of the year”

It is now believed that a request has been submitted to roly-poly morning TV presenter, Eamonn Holmes, to build the course on the cheeks of his gigantic, flabby arse. 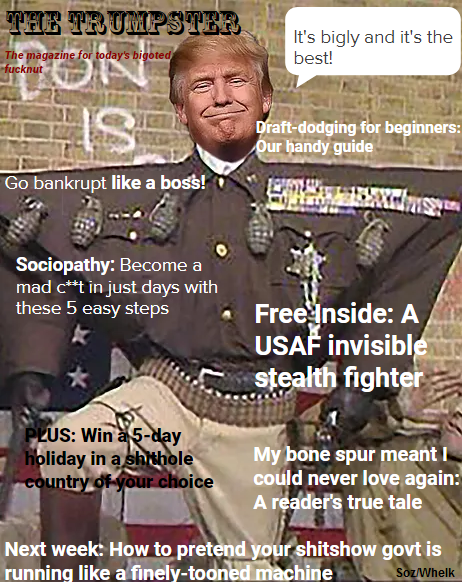 We had an editorial staff meeting earlier in an attempt to write an amusing post script to this one but decided instead to point you towards this clown’s latest attempt to defraud the American electorate in a somewhat deranged and ever more desperate call to the governor of Georgia as it’s much funnier than anything we could come up with.

The poor sod is now clearly as nutty as a squirrel’s underpants, and, loathe as we are to lampoon the mentally unstable, we have decided to make an exception in the case of this mad orange fuck. – Ed

A senior White House insider has revealed that President Donald Trump spent yesterday afternoon on his hands and knees in the Oval Office, searching for a missing coloured brick from his toy, builders set; a clear indication that Trump is now resigned to leaving the White House on January 20th next year

The unnamed official told Reuters news agency: “The President seems to have realised his days are numbered and has already begun to collect up his favourite toys; including his Barbie and Ken dolls, his pop-up reading books, and his collection of Fuzzy Felt farm animals.

“However, he had a problem finding one of the coloured bricks which he keeps in a special pull-along, wooden cart at the side of his desk and spent well over an hour, looking under the furniture for the item.

“He became extremely upset at one point and had to be placated by his lawyer, Rudy Giuliani, who told him not to cry and that the federal government would provide him with a new set, complete with a cart, before President Biden takes over next year.

“He appeared to accept this, and after blowing his nose into Mr Giuliani’s proffered hankie, he settled down to watch a box set of Yogi Bear cartoons until it was time for his tea”

The White House press office last night quickly moved to dismiss rumours that Trump has privately threatened to push the incoming President Biden over at the White House handover in January, or that he also plans to pull Mrs Biden’s hair before he boards the helicopter that will take him home afterwards. 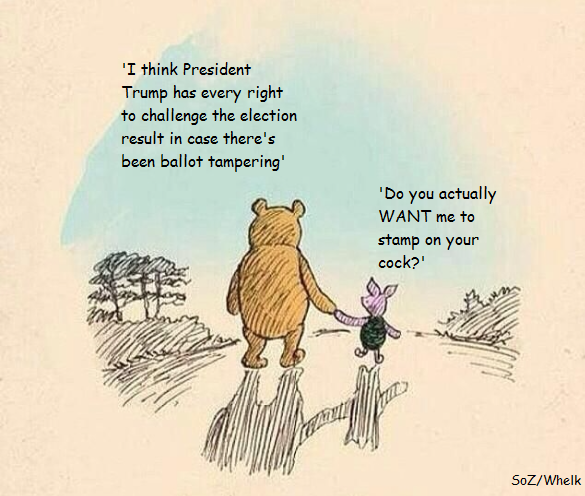 A White House official, emboldened by the US election result, last night crept into The Oval Office, where President Donald Trump has been sleeping since the outcome became clear, and gently closed his eyelids in a bid to prevent the sleeping POTUS from freaking out fellow staffers who have complained that his habit of sleeping with his eyes open has unnerved them.

The unnamed aide told The Whelk: “He looks and sounds insane enough when he’s awake, so you can imagine what he looks like when he sleeps with his eyes open.

“He’s one crazy fuck and we all can’t wait until Joe and his wife move in on January 20th.

“I know that a number of my colleagues have been really freaked out by the way he sleeps.

“One lady told me that she entered the Oval Office to grab a file and he was asleep, flat on his back on the desk with his eyes wide open.

“As she was leaving, he farted loudly, sat bolt upright, tugged on his belt and yelled, ‘Daddy, is it that time again?”

Trump is not the only Republican President to take his repose in the Oval Office.

In 2003, President George W Bush climbed on top of his desk and slept soundly for three hours while British Prime Minister, Tony Blair was explaining to him how he had found God.

It is being widely reported that defeated US President, Donald Trump, is making plans to set up an election-free alternative America on the enormous face of Brit pop idol Olly Murs.

The leaked plan involves building a new White House, complete with golf course, on the northern reaches of Murs’ face, probably on his forehead which is estimated to consist of over thirty thousand square miles of largely undeveloped skin.

The middle part around the cheeks and nose will be predominantly industrial, with a largely blue-collar population, plus a Mexican contingent who will cut their lawns and take care of their children while they’re at work in the factories.

The upper lip and chin area will be turned into a new Deep South, where white people with appalling dental hygiene will have sex with their mums and dads while black people will pick cotton and compose Negro spirituals which the men will sing around the campfire at night while the womenfolk rub raw cane spirit into their whip injuries.

We contacted Murs last night who told us: “You must be joking. I’m not having that mad orange twat and his fascist mates setting up a dictatorship on my big face.

“In any case, Jeremy Corbyn has already moved two thousand of his loyalist supporters onto my forehead with a view to building a new Socialist Utopia where the workers can live free from the yoke of the capitalist hyenas without fear of exploitation by the boss classes or recrimination from the media when they’re having a go at the Jews”

A 35-year-old Whitechapel woman has told The Whelk that the reason her three youngsters haven’t been abducted by a paedophile gang is down to a recently installed lamppost in her street which she claims was commissioned by US President Donald Trump, primarily to ward off death-dealing 5G covid-19 rays being emitted from the other lampposts and also her microwave oven.

Tracy Dell, a housewife and mother of three told us: “I live in fear of my kids being abducted by paedos, but thanks to President Trump’s anti-5G lamppost, they have all remained safe.

“It was only installed a few months back but I knew immediately it was a Trump lamppost because it had a bit of orange paint on it that set it apart from the others, in the same way that Donald’s skin makes it easier to distinguish him from his wife and Mike Pence who are much whiter.

“Since that lampost went up not one of my kids has been kidnapped by nonces, nor have any of them contracted 5G-generated covid, although my hubby died from it last week.

“I can’t thank the president enough and have written to him at The White House and have also sent letters to Amanda Holden and Eamon Holmes off the telly, as I know they’re just as scared of 5G covid rays as I am”

Mrs Dell’s assertion comes just five days after a man from neighbouring Stepney complained that Bill Gates was syphoning blood from his 4-year-old cat and giving it to Tom Hanks so that the star could drink it in a bid to stay young-looking.

If you’ve been affected by any of the issues raised in this piece it might be an idea to give your head a bit of a wobble, or failing that, to throw yourself in the Thames with an anvil chained around your neck – Ed.